an ever expanding furby collection (dangerous) 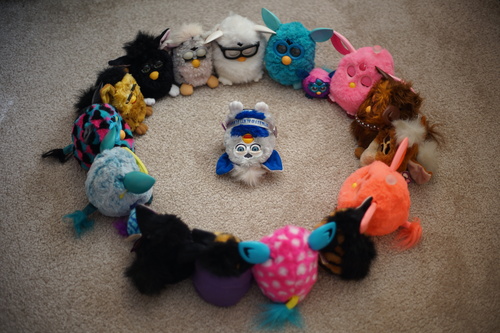 I have so many of these things. I have had to force myself to stop buying every one I see. I have no more room in my home. Please help.

My first furby was a Leopard furby! I have two now and you can only tell them apart because my original furby is a mute.

My aunt bought a furby and didn't like it so she gave it to me and my sister. Another one was found at a thrift store and given to Ryan.

My friend has this furby. I hope he is keeping it safe!

One of these was my sister's original furby. I imagine it was the dirtier one.

The one with green eyes was given to me by my cousins who hated their furby. I had made him a little wizard cloak out of felt. The brown eyed one is likely from a yard sale.

Such a cute color! Unfortunately this furby does not work.

Somehow my mother was able to keep this furby boxed in a house with 2 children. Not sure how.

This furby graduated with honors.

Given to me by a doll friend in 2014 after a doll road trip where my obsession was revealed.

Found at a yard sale!

When my first furby quit talking, I got a furby baby. I was so unhappy with it that I ended up returning it. I never got another! 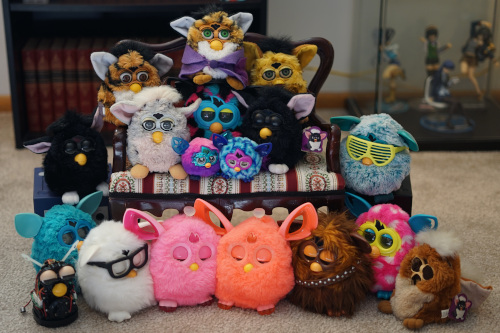 I don't own and have never seen one of these in real life. I do own an unopened puzzle though.

This release is so strange. The beak and eyelids appear to degrade on them. I can't help but dream of owning one.

I really wanted "Festive Sweater" but I never ended up getting one! I have official furby cigarettes!!

You bet I fought someone for this furby on black friday 2012 at Walmart! I have the box.

Another furby I got on black friday at Walmart. I have the box for this one.

I think I got this guy for Christmas in 2013 from a good friend. I'm fairly sure I have his box.

A Christmas gift from someone I used to know. I have the box.

Same as above. I have the box.

This release is too cute!! I may be alone in having that opinion. I love them!

My imouto ordered one of these off Amazon for me when they were released. The pink one was unavailable at the time. 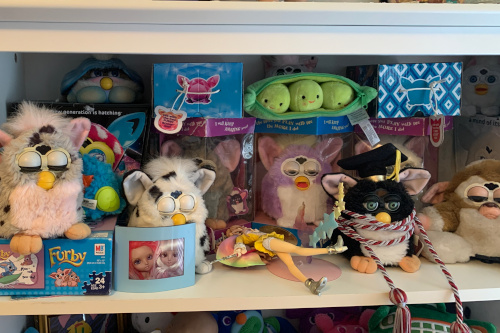